First responders run toward crisis, helping those in need without worrying about themselves. The night of the Route 91 shooting, first responders were everywhere—concertgoers tending to strangers even as gunshots rained down from the sky; journalists running to report at the scene; drivers shuttling the wounded to local hospitals, and hospital staff treating victims for days and weeks to come.

There are 13 hospitals in Las Vegas, including two trauma centers within a six-mile drive of the Route 91 concert venue: University Medical Center (UMC), a Level 1 trauma center, and Sunrise Hospital, a Level 2 trauma center. But according to Google Maps, Desert Springs Hospital Medical Center—a 293-bed community hospital known for its cardiac, diabetes, weight loss and stroke programs—is more than a mile closer. 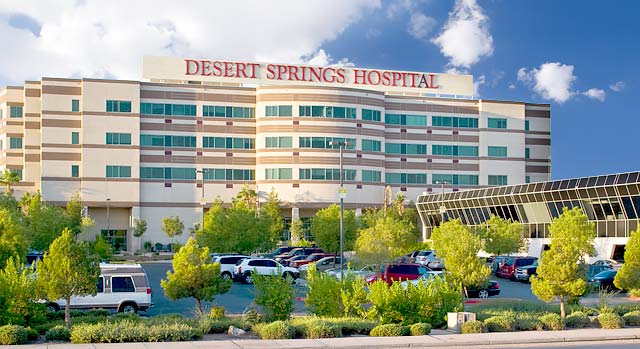 While ambulances rushed victims from the Mandalay Bay area to both trauma centers, taxis, Ubers and other drivers ended up taking people to the closest hospital according to mapping apps: Desert Springs. “The people coming through the front door, they were all injured, and most had gunshot wounds,” Lonnie Empey, an internist and vice chief of staff at Desert Springs, told The Las Vegas Review-Journal. “[We are] a small community hospital, and we became a trauma center within minutes or seconds of people dropping off people out of these trucks.”

That’s where Babij ended up. His physician, Empey, and Karen Donnahie, a nurse and the emergency preparedness coordinator at Desert Springs Hospital, shared their experiences from that night.

Empey was about to go to sleep on Sunday evening, October 1, when his phone rang around 10:20 PM. The voice on the line said something about a mass casualty—he was needed at Desert Springs Hospital immediately. Empey lived half an hour away but he arrived in 18 minutes, driving 80 to 90 miles per hour the entire way. “I saw lights behind me and it was two Metro police cars, and they go flying past me,” he said. Instantly, he knew that whatever had happened was serious.

Empey has Vegas in his bones. He grew up there. His father did, too. His brothers are cops with the LVMPD. After serving as a doctor in the Army for 12 years, Empey returned to Las Vegas and joined Desert Springs as an internist in 2014. He’d witnessed trauma before. While stationed in Fort Knox, Kentucky, he says he saw seven or eight gunshot victims in rural towns, most due to self-inflicted accidental gunshots. He also cares for bull riders with the National Finals Rodeo in Las Vegas and the Professional Rodeo Cowboys Association. “Rodeos can go bad pretty quick, but usually it’s only one or two victims,” he said. In short, nothing prepared him for what he walked into that night at the hospital.

“I went to the back door, expecting nothing in the emergency room—we had four ambulances and those four victims were DOA [dead on arrival], even though the ER docs were working on them, getting chest tubes and trachs to get their airways supported,” he said. “Because I was internal medicine, they always said, ‘Go to triage.’ I think, ‘Okay, I’ll walk out front, see someone with chest pain or someone who got their ankle stepped on. I’m doing this nonchalant walk out front, thinking, ‘No big deal.’ I hit that ER waiting room and for a full 10 to 15 seconds I was stunned. I stood there and it was utter chaos. Truly utter chaos. Everybody was bleeding everywhere. People were all coming through the door at the same time. People were just crowding in and finding places on the floor. I didn’t know who was bleeding because there were so many victims. I said, ‘We need more nurses!’ If they’re screaming, I know they’re okay. If they’re not screaming, we go to them first.”

This continued for hours.

One of Empey’s patients that night was Babij. On the surface, he recalled, Babij’s gunshot wound looked like nothing more than pencil mark. There wasn’t even any blood. But underneath, Babij “had a fragment that split his humorous in half,” Empey said. “It went into his chest wall. He had so much edema that operating on him early would cause more damage than to let the inflammation reduce before going to surgery.” Empey consulted with an orthopedic surgeon, and they agreed that they couldn’t proceed until the swelling went down.

“There were two things I got emotional about,” Empey said. “When I saw people showing up at the blood bank at 3:00 AM. And when I saw what police officers and firefighters were trying to do to get victims. They were inside the area that was being shot at, and they were still trying to get victims out. And then I saw nurses in hospitals who were just absolutely amazing. Of all the people who came in those trucks, not one victim died in our hospital. That’s not because of us as physicians, but because of the nurses and staff.”

Asked what he learned that night, Empey said:

“The joke in Vegas,” Empey said, “is if you want good healthcare, go to the airport to get home. After 10/1, I was proud to be a healthcare provider in Nevada. Every hospital did what they needed to do.”

On Sunday night, October 1, Donnahie’s phone rang at the same time as Empey’s, around 10:20 PM. Desert Springs Hospital, where she was the emergency preparedness coordinator, was on lockdown. “I go screaming down the freeway. There’s nobody on the roads,” she said. “I get to the hospital, park my truck and sit there for a minute, saying, ‘What is my safest way to go in?’” She walked past a police car, only to find one of its doors swung open and the interior covered in blood. Inside the hospital, she ran into Empey, who told her he’d heard a rumor about a bomb at the Venetian.

Donnahie’s job that night was, as she put it, “to make sure everything goes how it should go.”

By 10:30 PM, a line of cars and pickup trucks snaked down the one-lane driveway outside the hospital, each one waiting to drop off victims, some crammed with eight to 10 people. Inside the waiting room, people stood, crouched, sobbed and screamed. “By 11:00 PM, every inch of floor in there was covered in blood. It was packed. We couldn’t walk through, there was no space,” Donnahie said.

That night, 105 victims came to Desert Springs for treatment, most driven there by good samaritans. Only 11 arrived by ambulance, Donnahie said. “The sickest of the sick we transferred out. The walking wounded we transferred out. We kept everybody in between, which is not something we’re set up to do but we did that night.”

Going to a trauma center when you have a traumatic injury matters, because it’s set up to provide the best possible care—surgeons are experienced at treating gunshot wounds, operating room teams are ready to go, nurses and physical therapists have a deep understanding of trauma. “There’s a whole umbrella of services available to you at a trauma hospital that aren’t available at a community hospital” like Desert Springs, said Donnahie, who’s spent 30 years working as an emergency nurse.

That night, her first hurdle was securing the hospital. Once she got 14 armed security officers stationed around the area, she had another problem: lack of supplies. “We don’t have a warehouse at our hospital. We get daily deliveries of our materials. This was Sunday night around 10:00 PM. Our next delivery was 6:00 AM the next morning! So we run out of important things that we need in a traumatic situation—chest tube trays, central lines,” she said. She asked her assistant chief nursing officer, who was en route, to stop at another local hospital and pick up supplies. “There was no tracking of resources. I can’t tell you what they sent us. I don’t think we paid for anything.”

“That night, we did a lot of things we don’t normally do,” Donnahie said. “We did nothing wrong. We’ve learned things we can do and will do in the future, but we didn’t make a mistake. We have no lessons learned from things done incorrectly. We have lessons learned for things we weren’t trained for, because you can’t train for a tsunami of injured people showing up. We train for a surge. You’ll have 50 extra patients. If you’re talking about a pandemic or a flu, there’s a slow increase: 10 extra this hour, 15 extra the next hour. This was 105 patients in a couple of hours! It overwhelmed us. But we waded through. We got them taken care of.”

The day after the shooting, Donnahie said her day shift staff arrived at the hospital, furious, complaining that they hadn’t been asked to join the hospital’s response the night before. They felt like the B team. “It’s not that,” Donnahie said. “You cannot function in a crisis environment like this. You have to have down time and go home. Twelve hours is as much as you can do. Ten hours is better… Desert Springs is a young emergency staff. We’re really good at heart attacks and strokes and diabetes treatment. We don’t do a lot of bullets. So seeing some of the catastrophic wounds that came through there, staff struggled with that a lot. We had a number of peer-to-peer meetings. We referred people to the employee assistance program. But much like firefighters, there was a lot of, ‘We’re fine. I’m fine. I don’t need any help.’”

For the first few weeks after the shooting, Donnahie saw more and more staff taking time off work. A colleague who was planning to retire in January 2018 left on October 14, 2017, two weeks after the attack. “A couple of people got more encouragement than others to go to therapy. You can’t force anybody to do it. I’m anticipating we’ll see an increase in poor behavior choices.”

oth Donnahie and Empey praised the local healthcare community for collaborating more than they had ever seen before. “That night, everybody stepped up and did their job. The communities as a whole, we are now more enmeshed than we are apart,” Empey said.

“Tomorrow morning I have a valley-wide meeting with two fire departments to try to figure out how to support hospitals,” Donnahie said. “When the fire department or EMS calls the hospital, they’re always saying, ‘How many can you take? I’ve got 17 to send you. What can you do for us?’ In one meeting, the dispatcher said, ‘I called Desert Springs and they never said they needed anything.’ I said, ‘That’s true, because for our entire existence, you’ve never asked us if we needed anything—and we never knew we could ask for anything.’” She is working to shift these communications, so that regardless of what the event is, they start with questions like, Do you need any resources? Do you have open beds?