Returning To The Scene

The second day of the ACIA conference—seven months, to the day, after the shooting—attendees returned to the shooting site to witness and remember. Peering out a window from high atop the Tropicana Las Vegas, less than a quarter mile away from the concert venue, people were stunned at how small and unremarkable the plot of land was: a concrete slab the shape of a horseshoe, a mere afterthought compared to the colossal Luxor pyramid and gold tinted Mandalay Bay across the street.

Snaking back through the Tropicana casino and out into daylight, the group then headed towards the festival site, walking from Las Vegas Boulevard to Reno Avenue to Giles Street and Mandalay Bay Boulevard. Along the way, they saw Hooters a few blocks away, where Mark-Babij sought shelter—and remembered how it felt too close for Babij when he was fleeing the scene.

The concert venue sat raw and monolithic in the sun, a testament to the lived trauma that affected countless people. A tall chain-link fence, covered in dark green fabric, surrounded the lot, a few rotten flowers and makeshift signs hanging limply from the links. Small rips in the fabric, no more than a few inches long, were just big enough to peer inside. A security officer paced the premises. Around the site, cars whizzed by. People ambled on nearby sidewalks. Across the street, Mandalay Bay seemed to glow in the sunlight. 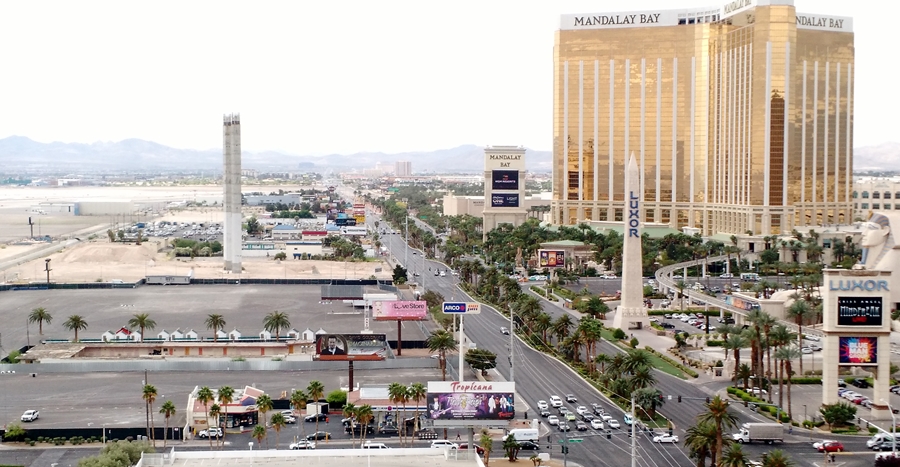 “I’m wondering why there weren’t more gates—perhaps with a security guard present—that might have allowed egress out of the facility,” Gorelick, the criminologist from Hunter College, said as he walked around the festival site. “This reminds me of all the big sporting events and street fairs I’ve attended, where leaving has been the most difficult challenge simply because restrictive entering and access were thought about more than exiting.”

Security planning often focuses on “show of force,” he explained, which is why we often see armed guards and an authoritative police presence at major events. “That will always be somewhat performative, theatrical,” he said. “If you’re talking about real safety, you have to be just as vigilant about exits… Event planners often want events that give a feel of being exclusive, secluded and profitable, but those very qualities can create a venue from which it’s hard to escape.”

Within a week of the mass shooting, hundreds of volunteers built a community healing garden in an empty lot in downtown Las Vegas. Lining the stone walkways were cowboy boots filled with flowers, mementos hanging from twine, and 58 trees, one for each victim. Photos of the dead hung from a remembrance wall.

Journalist Stefanie Friedhoff, who attended the ACIA conference, wrote the following vignette after visiting the garden.

I spent the afternoon at the Community Healing Garden, where I met several survivors as well as Brad Jerbic, the city attorney who was involved in making the garden happen and is now working on a permanent site for the Remembrance Wall right next to the garden (building a house for it, to keep things dry.) He was pure Vegas: Looked like a surfer with his athletic build and long hair in a ponytail, talked like a politician—the good, competent kind—and cursed like a New Yorker.

There was Bill, a survivor from Colorado, gun shot in the shoulder similar to Chris, who today had made this first trip back to Vegas as part of his journey to find healing and maybe get rid of his nightmares, if that wasn’t too much to ask? He’s a paramedic and immediately started helping after the shooting stopped, and didn’t notice until later that he was shot, too. He’d been dancing next to a young girl when it happened and then tried to shield her, but he failed, and she was shot. He’s also a country dance instructor and now associates both the music and the movements he loves with the mayhem of that night. He is leaking survivor guilt from so many parts of his existence that, like him, I briefly, desperately try to catch it and shove it back in but of course, one can’t—that’s not how healing works—so instead, we talk about that, about becoming comfortable with the incident forever being a part of his fabric, and not just because of that bullet that pierced his bones. He jokes that they didn’t even let him keep the bullet, claiming it was evidence. I do walk through the steps of psychological first aid with him and am relieved to learn that he has a good network around him and seems to be doing all the right things; except for the part where he is ready to enter therapy but can’t because he makes $300 too much to be eligible for services at the community health center in his town, but can’t afford health insurance that covers psychological/psychiatric care.

Brad the city attorney, who shows up towards the end of Bill’s story, immediately invites him to his office the next morning to talk about his care situation and see how Bill can get psychological support, from one of the funds or otherwise.

Another survivor shares that he drives for Lyft sometimes and people ask him about his Vegas Strong sign in the car, and when he tells his story, his ratings go down significantly. “People ask, but they don’t want to actually hear,” he says, “even when they keep asking more questions while in the car. So I’ve stopped telling them. I come here, because here I can talk about it.”

More people keep showing up over the course of the afternoon. One guy sits down not on the bench but the ground in front of the Remembrance Wall, crying and singing a prayer in Hebrew. He was a cop once and knew two of the victims who died, and tried to drive towards the scene that night after getting a call from a friend, with all his guns loaded into his truck (luckily, he didn’t get very far.) He is of the ‘we need more guns, it’s all Obama’s fault’-type (a Jewish one, nonetheless; this is Vegas!) Others who are paying their respect—a group of three women dropping off flowers; they were on the strip that night—are clearly of a different opinion on the gun and Obama questions, but only gently disagree while sharing the grief and utter frustration that this could have happened. There are many hugs and no politics here this afternoon; between the cowboy boots filled with fake flowers, the names scribbled on colorful rocks, the photos showing preposterously happy people who are no longer around, Trump country isn’t happening, at least not today; not here, not now.

I ask Brad about the constant stream of visitors and he says, even if I came at 3 AM in the morning, there’d be some. “There’s always people here,” he says. “Everyone knew someone. Everyone has a story.”

A young woman from Sweden stops by to see the Garden, and even though he’s much older, Bill starts flirting and talking about country dancing, and she asks him if he would show her some country steps. So there they are, in this tiny, tacky garden that’s tucked away between exaggerated streets and abandoned lots, with nothing but the enormous blue sky to assure the presence of beauty in this blatantly absurd world, and these two are falling in step, moving hips and legs, two strangers, one laughing, one crying, one just there in the moment because she has no idea and it’s fun, the other simultaneously embracing and disbelieving the moment, because he didn’t know he could do this anymore and of all the possible places in this town, a girl asks him to dance in front of the Remembrance Wall?

If what I saw today were just four typical hours in what have been seven months of mourning, then no one person can bear what this garden has witnessed already. But of course, I have to remind myself, no one person has to. The recovery from this shooting is a burden, and a process, shared by many, and the Garden is where they find each other, randomly, determined only by whoever shows up that day. It’s quite brilliant.