Two decades before 9/11, Suzanne Silverstein founded the Psychological Trauma Center, which works through schools, principally with art therapy, to to help children who have undergone traumatic experiences. The center is based at Cedars-Sinai Medical Center in Los Angeles and is currently active in 27 schools throughout the Los Angeles area — most serving low-income and predominantly minority children. Typically, the children the program serves are troubled by events close to their homes or neighborhoods, usually acts of domestic or gang violence. But even if 9/11 was more distant it also reverberated in those children’s lives, Silverstein told ACIA’s conference:

We saw this [9/11] unfolding on the news and my staff started calling, should we come or not? Without thinking I said yes, and I realized as we talked that they would need to go in and be ready to deal with parents and the kids. Indirect victims can be impacted just as terribly as the victims and people tend to forget about those.

When I contacted the schools, the principals said, “oh, my school’s fine, there is no problem, we are really doing fine.” Those who lived in South Central said, “oh well, we have 9/11 every day of our lives down here, we have no problems.” But then my staff gets there and starts getting these drawings. We got a lot of drawings of people jumping out of the windows, drawing after drawing.

That was done shortly after September 11. What we found out was that the Spanish language stations showed that scene over and over again. The local stations did not show it. They showed it once and as soon as they realized what they were showing they stopped it. But the Hispanic stations showed it all.

The kids were very traumatized, not just by watching this but because these are very low income families, so we have a family living in small area with just one TV and that was all they were looking at over and over again. The other impact we saw is that the kids thought there were more than two buildings destroyed, because TV showed it over and over again so in their minds it kept happening over and over. They did not realize it was a repeat.

Six months later we asked the kids, what do you think about it now? Those drawings were fascinating:

They did not feel as helpless any more. They now have some kind of ego mastery in their own minds of something they could have done

He was a child and he was squashing the terrorists.

For the anniversary one year later, we published booklets of these drawings for the teachers and for the parents. I felt it was really important for teachers to have some kind of information, because we know teachers are not trained to deal with any of this or on what they could expect to happen on the anniversary. We had no idea what was coming on the media, we had no idea what people would hear. So we developed the book and we distributed it to all our schools and to parents.

The other thing we did for 9/11 was that we had 20 of them blown up to 6′ x 4′ and we put these panels out in our lobby. They were supposed to be up for a week, I think they ended up there for three weeks. And we developed a video. We went into South Central and we interviewed these kids one year later. And the artwork is kind of interspersed with it, what they think after 9/11, what were their thoughts, how did they feel. In those days in South Central there was so much violence that every weekend somebody was killed. My staff would come back to me and say oh, this one lost her husband, this one lost someone else. So they have multiple traumas. 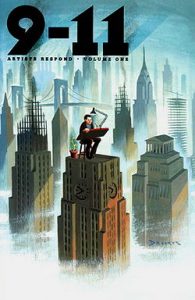